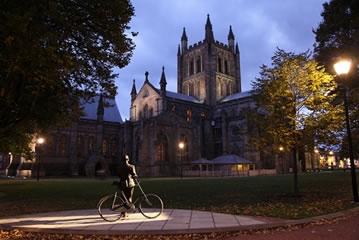 The first of these is the finest surviving 1217 Magna Carta, a significant revision and reissue of King John’s Magna Carta by his son, Henry III. This superseded the earlier agreement, forming the basis of the final text set as Statute Law in 1297.

The second item is the unique ‘Kings Writ’, issued by King John from the meeting of the rebel barons at Runnymede in June 1215. This remarkable letter from the King is to royal officials throughout the kingdom, telling them of the peace made and charter agreed. It is addressed to the sheriff of Gloucestershire, with John instructing him to ensure the terms of the charter are made known publicly, sworn to and kept. The document also asks that the ‘evil customs’ of other sheriffs and officials are investigated and abolished.

Two important Magna Carta items are housed in the New Library building of Hereford Cathedral together with a wealth of other fantastic treasures. The Hereford Magna Carta, the finest surviving 1217 charter represents the most significant revision of the original 1215 document issued by King John’s son Henry III. The Library also holds the sole surviving copy of ‘King John’s Writ,’a letter issued to royal officials across England, from his meeting with the barons at Runnymede. The document essentially the Magna Carta ‘covering letter’ instructs recipients to ensure the terms of the charter are made known publicly, sworn to and kept. Period illuminations and documents from the cathedral’s historic Chained Library are displayed alongside.

Click here for more information about events in Hereford